I write  fantasy, urban fantasy, magical realism, and paranormal romance. But I primarily write visionary fiction. It’s not a genre that is as well known as, let’s say, urban fantasy. But, it has a loyal following, and it is no longer meshed under fantasy headings. It is distinct and becoming increasingly popular. I want to help readers understand what visionary fiction is about, so I will be writing a series of posts about the genre, in several parts. This is Part One.

I learned about Visionary Fiction first hand. I was in my thirties when the magical town of Glastonbury England, where “The Mists of Avalon” was set, beckoned me. I answered the call to adventure, and moved to that ancient Isle of Avalon for nine months. Glastonbury had more in mind for me than adventure.

While living there, I would take a daily walk to the nearby Chalice Well. The well is an ancient holy spring, a pilgrimage site set amidst a garden of colorful English flowers, hawthorn shrubs, Rowan trees, and meandering paths. As I’d sit beside the bubbling springs, my mind would still its chatter, and my body would heave a sigh of relief. Early one morning in late spring, while in that relaxed state, an unbidden vision flashed in my mind’s eye. Vague images of robed women, seemingly from times long past, filled my thoughts. Over the course of the next hour, I watched them plant their gardens, and bake their bread. Saw how they’d treat the sick or injured who came to them for help. I heard them sing and chant. And, to my surprise and shock, I also saw them fall, defenseless, at the hands of raiding marauders. I heard their screams, felt their pain and terror rent my heart.

Once the images faded, I sat beside the well until the sun set behind the rounded hills. Unable to move or make sense of what I’d seen, I was gripped by the sadness the images evoked. If it weren’t for my budding friendship with Anna, the owner of a local bookstore, who knows what I would have done with this experience. Maybe I’d have written about it in my private journal, keeping my vision to myself, and never fashioned a story from it. But Anna and her eccentric grandmother forever changed that…

(continued in Part Two, next week) 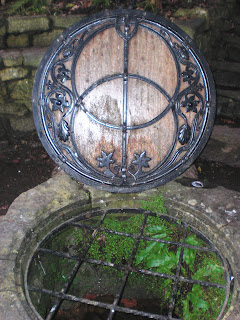