Skip to content
The genre of visionary fiction is a journey of the soul.

I write fantasy, urban fantasy, magical realism, and paranormal romance. But I primarily write visionary fiction. It’s not a genre that is as well known as, let’s say, urban fantasy. But, it has a loyal following, and it is no longer meshed under fantasy headings. It is distinct and becoming increasingly popular. I want to help readers understand what visionary fiction is about, so I am writing a series of posts about the genre, in several parts. This is Part 2. You can read Part 1 here.

After my incident at the Chalice Well, Anna told me about her Irish born grandmother, Millie. She recounted her last visit with Millie, years ago, the cold and damp winter she turned thirteen – only months before her grandmother died. From her vivid descriptions, I could imagine Anna as a young teenager, almost felt as if I’d been on that visit with her.

Millie had lived in a small village in western Ireland, and owned an old stone cottage with a cozy inglenook. Anna spent many hours beside that hearth, wrapped snugly in a warm wool shawl, watching the flames lick the edges of the sweet smelling peat. Her grandmother would sit on the bench beside her, her craggy face illuminated, her gnarled hands wrapped around a mug of steaming black tea, often with “just a spot” of whiskey added. Anna would snuggle into the protective shoulder of her grandmother, never really minding the cold, because that was the winter her grandmother taught her how to “travel.”

Millie was a natural story teller, what her ancestors might have called a Bard. She regaled Anna with tales that sprang to life in the tiny, fire lit living room. Tales of the mighty heroes of ancient Ireland, the power of the land, and the Tuatha de Danaan, the early Gods and Goddesses of Ireland. Most of her stories had to do with the Celtic Imram.

The Imram was the mythical heroes’ quest, the adventurous travels taken by ship to reach the farthest islands in the western oceans, in search of treasures, healing, or immortality. But Imrams were no ordinary expedition to explore the promises of those distant shores. They were the extraordinary voyage of the soul. The islands the travelers visited were portals to the Otherworld, that numinous place of magic, mysticism, and paradise. Whereas their outer expeditions brought them to the edge of the known physical world, where they had to fight in order to survive, their inner voyage brought them to another sort of edge – one where they had the opportunity to evolve heightened levels of awareness. New spiritual realizations were gained and changes in consciousness occurred.

Through the tales of Anna’s grandmother, I came to see that my experience in Glastonbury was my Imram. And those startling images I’d seen as I sat quietly beside the Chalice Well were my initiation into major shifts in awareness. Several years later, those provocative images eventually married my creative Muse, and birthed the novels that became my Goddess of the Stars and the Sea Visionary Fiction trilogy.

(to be continued in ‘Visionary Fiction Part 3’,  on Friday) 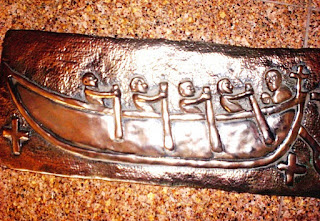