Skip to content
March is National Women’s History Month and March 8th is International Women’s Day – an annual commemoration to celebrate women’s achievements throughout history and across nations. I’ve listed links to a few resources you might find interesting during this month, including an article depicting the life of the seemingly fearless pioneer of investigative journalism, Nellie Bly.

But first, I wanted to let you know about my International Women’s Day gift for you and why it is timely. As one author/reader said of Sharay, the main character in Carry on the Flame:
“If you have ever felt you have a calling or a mission in life that you resisted or if you are experiencing the challenges of stepping up to meet that call, Sharay’s journey is yours. If you feel you are not listening to your most authentic heart and want to, Sharay’s bumpy journey is yours.” ~Alissa Lukara, author of Riding Grace.
Thank you, Alissa, because Sharay’s journey is indeed the initiatory journey of the sacred feminine; the journey of all women. In honor of women’s journeys, I am offering Carry on the Flame for free on Kindle for a limited time. Carry on the Flame: Destiny’s Call is free March 10th-14th. If you were thinking of downloading a copy to your Kindle, now is your time! (You can download the free app if you don’t own a Kindle).
~*~*~*~*~*~*~*~*~*~*~*~*~*~*~*~*
When I first heard the newsabout the latest assault on women’s character and women’s health rights, I thought of an empowering quote from Elizabeth Cunningham’s novel, Magdalen Rising, where the mother of the Celtic born Maeve/Magdalene speaks:
“Tir na mBan stands for the sovereignty of women,” concluded Fand. “If it exists nowhere else in the world, it exists there. Remember that, Maeve. Sovereignty is your birthright and your inheritance. Next to sovereignty, gold torques and brooches are mere trinkets. Never surrender your sovereignty, Maeve. Carry it with you wherever you go.” ~ From Elizabeth’s blog, (called Elizabeth and Maeve) 2/26/12
I, for one, will embrace my sovereignty!

During National Women’s History Month, I pay homage to a fascinating woman writer. I hope you enjoy the following article about Nellie Bly who pioneered the field of investigative journalism. She did some pretty amazing things. The article is from the Goddess of the Gypsy Moon March 2012 newsletter.
Herstory/Ancient Wisdom: 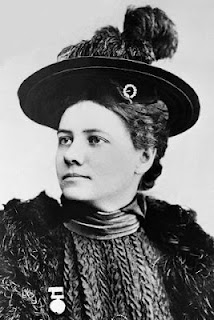 he third of five children, Elizabeth Jane Cochran was born on May 5, 1864 in Cochran’s Mills, Pennsylvania. Though she was ‘the most rebellious child in the family’ she was affectionately called ‘Pink’ because her mother (foretelling her baby’s adventurous personality?) dressed her in a bright pink christening gown instead of the traditional white for infants. That was rather brazen for those times! Her father, Judge Michael Cochran could afford to indulge his wife. A wealthy landowner, businessman and namesake of the town, he died when Pink was only six. Without a will, her mother was left alone to face severe financial difficulties. In her desire to provide for her children, she hastily married a man, a violent drunk who mistreated them for several years.. Despite the shame, her mother went to court to divorced him when Pink was 15, at which time she bravely testified to the judge on behalf of her mother. After enduring those harsh years Pink dreamed of being an independent woman so she could help her mother and siblings. With high hopes she enrolled in Indiana Normal School with hopes of becoming a teacher, though sadly, funding only allowed for one semester. 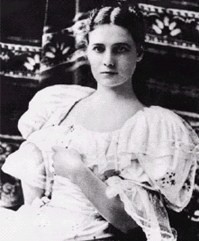 Pink as a young woman around 1880
With few options for an uneducated woman, she helped her mother in the running of a boarding house in Pittsburgh. In 1885, at age 21, after reading an article entitled “What Girls Are Good For.” by the popular columnist “Quiet Observer” in the Pittsburgh Dispatch, in which he wrote that working women are “a monstrosity”, (and further stating that women belonged at home performing domestic tasks, such as sewing, cleaning, cooking and tending to the children), Pink became so enraged that she wrote an anonymous letter to the editor, signed “Lonely Orphan Girl”. Little did she know that this letter would lead to the beginning of a journalist career.
The editor upon reading her letter was so impressed with her spirit that he placed an ad in the Sunday paper asking that the writer reveal himself. When she did, she was given the pen name “Nellie Bly” (women did not write publically in those days) and offered her a full time position, with the chance to write a rebuttal to Wilson’s ‘sexist’ piece on a ‘woman’s place’. She jumped at the opportunity. Boldly, she wrote on the current issues of women, including an article on the plight of poor working women; and one calling for the reform of the states divorce laws. Ever daring, she even went undercover as a factory worker and wrote an investigative series on the mistreatment and dire working conditions of factory girls. In response to threats and to prevent shop owners from pulling their advertising, the editor relegated her to the Women’s page and assigned her to stories about fashion, flower shows and garden parties. After nine months of utter boredom, she was craving excitement and adventure and decided to vacation in Mexico. While there she reported on poverty and political corruption until Mexico sent her packing.
SIX MONTHS IN MEXICO by Nellie Bly
Upon returning to the United States, she went to New York and after great determination and persistence, she obtained an audience with the managing editor of the New York World and convinced him to hire her. On September 22,1887 she was given her first assignment: to go undercover to investigate the Women’s Lunatic Asylum on Blackwell’s Island and “Write up things as you find them, good or bad, give praise or blame as you think best, and truth all the time.” Taking this assignment seriously, she concocted a plan and moved into the Temporary Home for Females, No. 84 Second Avenue (a boarding house for working women) under the name of Nellie Brown with the intention of setting all the women there so ill at ease by ‘acting crazy’ (“they would never rest until I was out of their reach and in secure quarters.”N.B.), thereby convincing everyone, but especially the police and the courts that she was insane. It worked and she was committed to the asylum for five days of observation. While there, she befriended many sane women, and witnessed and even experienced many atrocities. She was so convincing in her role that the doctors did not want to free her;  it took ten days of pleading her sanity before the attorney for the newspaper was able to prove her sanity and get her released.
“Could I pass a week in the insane ward at Blackwell’s Island? I said I could and I would. And I did.” — Nellie Bly.
Once released she was said to have taken a relaxing 2 hour bath before sitting down to pen her findings. Due to her daring, unconventional and investigatory style of reporting huge changes were made in the processing and treatment of the in-firmed and incarcerated.

Read/download all of her books

Ever brave and adventurous, Nellie threatened to quit the paper upon hearing a male reporter was given the sensational assignment to enact Jules Verne’s fictional hero Phileas Foggs’ trip “Around the World in Eighty Days.”. She demanded the opportunity and purposed to beat his record! To spite the conventional rules, she surprised everyone as she stepped unescorted onto the ocean liner, the Augusta Victoria. And further, in an era where women were known for traveling with excessive baggage, steamer trunks, etc, she arrived with only two small satchels! On November 14, 1889, she began her whirl wind trip around the world. Heading east from New York, she traveled (by ship, train and burro) to England, Egypt, Ceylon, Singapore, Hong Kong, and Japan before returning to San Francisco where famed publisher Joseph Pulitzer arranged a special train to meet her and deliver her to New York, 72 days, 6 hours and 11 minutes later! She beat the record. She was an instant celebrity, and was surprised to be greeted with fireworks, gun salutes, brass bands and a parade on Broadway.

She quit the World upon her return when she wasn’t given a bonus, though later was convinced by a new editor to return, and on September 17, 1893 ‘Nellie Bly Again” appeared on the front page. She worked there for the following three years reporting on the social ills of her day, including police corruption and women’s issues; she even interviewed noted suffragist Susan B.Anthony, among others. Nellie Bly was known for siding with the poor and disenfranchised and in1894 she went to Chicago to cover the violet Pullman Railroad strike, and remarkably, she was the only reporter to report from the strikers perspective.
“It is only after one is in trouble that one realizes how little sympathy and kindness there are in the world.” – Nellie Bly 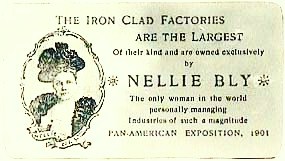 Elizabeth Cochran Seaman
At age 30 she  married 70-year-old industrialist, Robert Seaman and lived as a wealthy matron in New York City until his death, ten years later in 1904. She then took over his business and became the world’s leading female industrialist until 1914 when she had to declare bankruptcy due to poor management and fraud within the company. Wanting a vacation, she planned a trip to Europe to visit a friend in Austria, but the outbreak of WWI ended her vacation. She spent the next five years on a tour of duty reporting for the Hearst newspaper The New York Evening Journal of her experiences from the front lines as America’s first female war correspondent. 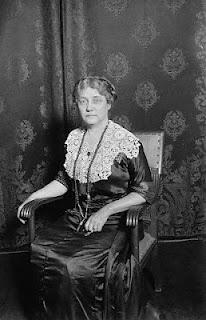 If you are interested in earth based spirituality, you can read an interview on how I weave the spirituality of the divine feminine, divine masculine, and their sacred union into my visionary fiction novels here.

Jodine Turner is the visionary fiction and fantasy author of the Goddess of the Stars and the Sea series about young priestesses who have lived in Avalon down through the ages to today. www.jodineturner.com