Today, July 22nd, is the Feast day of Mary Magdalene. She is an embodiment of the divine feminine. Not the prostitute of false legend. The Catholic Church declared her a repentant prostitute in the 6th century. In 1969 the Vatican reversed that proclamation. Nevertheless, the erroneous label oftentimes remains attached to Magdalene.

Early Christian writings , the apocryphal writings, reference Mary Magdalene – these are various early Christian writings proposed as additions to the New Testament but rejected as the major canons (the officially accepted books of the Bible). In these writings, Mary Magdalene is depicted as a leader, and the one whom Jesus loved above his other disciples. They call her the apostle of the apostles. Several Gnostic gospels, such as the Gospel of Mary written in the early 2nd century, reveal Magdalene as the one Jesus asks to teach the other disciples the unique knowledge he has imparted to her. The canonical Gospels of John and Mark report Magdalene as the first to discover the burial tomb of Jesus to be empty. She is the first to see him and to speak to him after he has risen. Recently discovered ancient literature has led to speculation that Magdalene was a specially instructed disciple who continued to proclaim Jesus’ message after his death. There is also evidence that she was the cherished wife of Jesus, and mother to his children, a discovery that many find controversial despite the indications that this is so.

I have listed my favorite writings about Mary Magdalene below. Most are scholarly or research oriented. A few are fictionalized accounts of the recent findings about her. Of note are the works of Margaret Starbird. The information in her book The Woman with the Alabaster Jar transformed my life, and it also changed my husband after he read it. Margaret began this particular book with the intention of disproving the speculations about Mary Magdalene as the special apostle, and the wife of Jesus. Her research convinced her otherwise. Additionally, a wonderful website filled with information on Mary Magdalene can be found at aniwilliams.com. The south of France in particular and even the town of Glastonbury, England, are filled with the history and legend of Mary Magdalene. 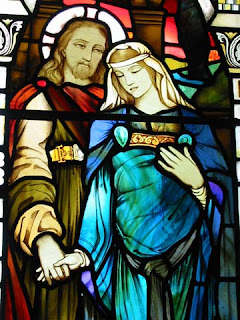 On the Isle of Mull of Scotland, in the small village of Dervaig, there is a stained glass window in the Kilmore Church. It is said to be Mary Magdalene and Jesus. A pregnant Mary Magdalene.

Immediately below the stained glass, there is a Gospel text. It reads: “Mary hath chosen that good part, which shall not be taken away from her”. This statement was made by Christ, and refers to Mary Magdalene. It is found in the Gospel of Luke, ch.10, v.42.

Mary Magdalene – book titles worth looking into.
You may find some of your classic favorites…are there any you’d like to recommend and add to the list?

Holy Blood, Holy Grail – Michael Baigent, Richard Leigh, and Henry Lincoln
Mary Magdalene: Beyond the Myth – Esther De Boer
Truth and Fiction in The Da Vinci Code: A Historian Reveals What We Really Know about Jesus,  Mary Magdalene, and Constantine – Bart D. Ehrman
The Magdalen Manuscript – Tom Kenyon and Judi Sion
The Gospel of Mary of Magdala: Jesus and the First Woman Apostle – Karen L. King
The Moon Under Her Feet – Clysta Kinstler (a novel)
The Gospel of Mary Magdalene – Jean-Yves LeLoup
The Secret Magdalene – Ki Longfellow   (a novel)
I Remember Union: The Story of Mary Magdalene – Flo Aeveia Magdalena
St. Mary Magdalene – Tau Malachi
The Church of Mary Magdalene: The Sacred Feminine and the Treasure of Rennes-le-Chateau – Jean Markale
The Expected One and The Book of Love – Kathleen McGowan (novels)
The Gospels of Mary: the Secret Tradition of Mary Magdalene the Companion of Jesus – Marvin Meyer and Esther De Boer
The Woman with the Alabaster Jar: Mary Magdalene and the Holy Grail – Margaret Starbird
(Starbird has also written The Goddess in the Gospels and Magdalene’s Lost Legacy and many more.)
The Underground Stream: Esoteric Tarot Revealed – Christine Payne-Towler (emphasis on Gnostic, Holy Blood, Magdalene themes)