The Wheel of the Year focuses on the cycles of the seasons and the natural rhythm of the earth. On February 1, the Wheel has turned to the festival of Imbolc, also known as Candlemas.

Though winter still prevails, Imbolc shows us that spring is not too far away. Imbolc heralds the approaching time where we can gather the inner peace and regeneration of our winter hibernation to utilize in the outer manifestation of our daily lives. The movement of the season is the outward birth from winter to springtime – the seed of spring is held within the womb of the earth. It is the lambing season, the birthing of baby lambs. The name Imbolc refers to the lactation of the lambs, the flow of life nourishing milk that heralds the return of life affirming spring. During this time in England, the flower called the snowdrop peeks above ground and blooms delicate white petals.

Imbolc is primarily celebrated as the festival of Brighid (also called Briget or Bride), the triple goddess of poetry, smithcraft, and healing. Brighid has been venerated as a great goddess for centuries in England, Scotland, and Ireland. The Ancient Celts of Britain called upon the goddess Brighid to warm, heal, and inspire. Brighid reminds us to use her creative inspiration to guide our daily tasks, to be grateful for and tend the fire of the hearth that warms us, and to rely on nature’s herbs to help nourish and heal us.
In Ireland and Scotland, groups of young girls, symbolizing the newness and maidenhood of Brighid, processed through the village streets carrying a corn sheath dolly from home to home. The dolly was presented to those within the homes who would honor her by decorating her with flowers, shells, stones, and ribbons. When I lived in Glastonbury, I participated in creating a Brighid dolly which was processed around the ancient Brighid Slipper Chapel and then laid upon ‘Brighid’s bed’ alongside the other Brighid dolls from the two years prior – the mother and grandmother ancestry. My novel, The Keys to Remember, describes a fictionalized Imbolc procession in detail. 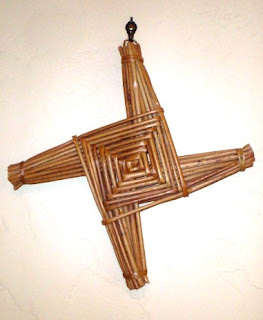 Another popular Imbolc custom was the making of Brighid crosses to hang high in house and byre. These were crosses of a triskele shape, to symbolize the three fold nature of Brighid. The crosses were made of rushes or braided straw. Rushes were traditionally laid down in the birthing place as they carry the symbol of new life. Today, Brighid crosses are often made with white and red yarn.
The goddess Brighid later became known as the Christian Saint Brigit. Imbolc, dedicated to the light-bearing qualities of Brighid, was renamed Candlemas. Candlemas was Christianized as the feast of the purification of the Virgin Mary, and was celebrated as a festival of lights. Candles burnt during Candlemas kept away storms, demons, and other evils. In this Christian version, Brigit was the foster mother of Christ and the midwife at Christ’s birth. As such, she was often invoked for her assistance at childbirth.
Legends say that Saint Brigit was the daughter of a druid who had a vision that she would be named after a great goddess. She was born at sunrise and she was reared on the milk of a special white cow with red ears, an animal often found in the Celtic Otherworld. You can see a carved representation of Brighid and her totem cow on St. Michael’s tower atop the Tor hill in Glastonbury, England. Also in Glastonbury is the famous St. Brigit’s mound, located in a field west of the town. Supposedly, in centuries past, there was a Brigit nunnery there. Some say it was earlier a convent dedicated to Mary Magdalene.
Saint Brigit founded a famous Christian abbey at Kildare, Ireland, in the heart of Leinster. There, in her convent, burned a perennial flame which became known as one of the three inextinguishable fires of Irish monasteries. The candle is reported to have burnt perpetually from the 5th to the 16th centuries, with Saint Brigit’s nuns tending and guarding the flame. The foundations of Saint Brigit’s fire temple where Brigit and her sisters tended the sacred flame still exist. Brigit’s flame has now been rekindled and is being tended to. Many healing wells and springs are named after Saint Brigit/ the goddess Brighid. Nearby the abbey at Kildare, about a mile away, stands a famous Saint Brigit Well.
Rituals for Imbolc:
1.     Light a white candle to honor the sacred perpetual flame of Brigit. Make a prayer for Brighid’s flame to symbolically spark the divine luminousity inherant within you. Ask Brighid to inspire you in whatever project you may want help for in your life.
2.     Pick dandelion leaves and eat them in your salad. This common weed, with their golden flower faces, remind us of the sun’s return.
3.     Leave a red or white silk ribbon on your doorstep for Brighid to bless on the eve before Imbolc. The ribbon can then be used for healing purposes.
4.     Make your own Brighid’s cross – instructions can be found here