The first day of May has been celebrated for thousands of years as the season of fertility, when nature displays her beauty, juiciness, and the fecundity that brings about new life. In the Celtic tradition, this is called Beltaine, which means the magic of flowers.

Flower blossoms herald the renewed vitality of summer. On Beltaine, we celebrate life, growth, love, and sexuality. Beltaine is the season for lovers. The life force of nature, the healing ‘greening’ or Veriditas as Hildegard of Bingen called it, courses through our veins as well as nature’s. No wonder Beltaine is often associated with love-making. 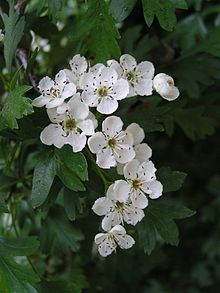 Hawthorn, a prevalent tree and hedgerow bush of England (as well as growing in the USA), blooms in May and is associated with Beltaine. Traditionally, ribbons and bright scraps of material were hung on the blossoming tree to honor Beltaine. It is said that Hawthorn’s small white flowers carry the scent of a woman’s yoni.

Hawthorn is also a tree sacred to faeries and faerie trysts. The hawthorn tree figures prominently as a magical tree and metaphor in my novels. As my Beltaine offering, I’ve included a book excerpt from Carry on the Flame:Destiny’s Call at the end of my post. It is the scene where the Welshman Guethyn prepares for his Beltaine ritual with Sharay.

Another tradition belonging to Beltaine is to jump between two Beltaine bonfires. This ritual brings good fortune and prosperity, as well as health to the livestock. The fires bring the power of the sun to the earth to sanctify and purify the whole community. The bonfire was kindled with the wood of nine sacred trees – willow, hazel, alder, birch, ash, yew, elm, and oak. Notice only eight trees are mentioned – the ninth is said to be a mystery.

The maypole was another popular symbol of e returning growth and upcoming summer. On May Day/Beltaine, a tall tree was felled and set up on the village green. A long streamer was tied to the tree pole and villagers added their own streamers in turn, weaving the ribbons in and out of each other as they danced around the Maypole.

****************************************
Beltaine Rituals:
1.On May Eve, make a May bough to place on your altar or to use as a table centerpiece.
Ask permission of one of the flowering trees from the sacred trees listed above, or from other flowering trees native to your area such as dogwood, crab apple, etc., to cut a small budding branch, including its twigs. Crush the bottom of the branch so that it will absorb water, and anchor it in a vase of water, with pebbles.
2. Make a traditional Hawthorn brandy.
Fill a wide-mouthed jar with hawthorn flower petals, cover with brandy, and let the infusion sit for 2-3 months. Strain and re-bottle.

*********************************************
Excerpted from Carry on the Flame: Destiny’s Call
(Guethyn prepares for his Beltaine Ritual with Sharay)
In the thick of the forest, Guethyn readied himself amidst a grove of birch trees. He had chosen the spot not only for the ring shaped thicket, place of nature’s ancient earth magic, but for the color of the birch bark. The silver hue reminded him of Sharay’s white-blond hair.
He sat cross-legged, spine erect, in the center of the grove. He was able to quiet his mind easily enough. What he was having trouble with was stilling his heart beat and the ache in his body that wanted only to touch Sharay in the yielding places that had brought her moaning with pleasure the night before. While pleasure was part of Beltaine’s gift from the Goddess, he knew this ritual meant more. Through the portal of pleasure, it would also be Sharay’s initiation into her true power.
His grandfather had given him a set of invocations and prayers as part of his preparation, and Guethyn set to work. First, he pulled off all of his clothes and dropped them in a pile beside him. He closed his eyes and shifted his attention to the verdant ground he sat upon, to the trees that surrounded him in leafy canopy.
He’d spent many years exploring the woods of his grandfather’s home in Northern Wales where he’d played amidst the huge oaks, learning how to forage for berries and mushrooms, how to make himself a bed of soft moss and leaves inside the cradling arms of the oak roots. Grandfather had made sure also to teach him about the invisible beings and the secret language of the forest realm.
“The forests of Wales are the poetry of the Goddess,” grandfather had said. “This landscape shaped our people and our culture, uninterrupted by invaders, for centuries.”
Guethyn’s body and blood carried this Welsh heritage and effortlessly thrummed in tune to the ageless pulse of the forest. It was as much a part of his being as his ancestors were.
Freshly blossomed blue bells spread their sweet scented carpet to blanket the ground around him, fanned out in a king’s mantle of brilliant blue and purple. He opened his hand to touch the delicate flowers and his fingers extended further, seemingly merging with the gnarled roots of the ancient oak tree in the midst of the birch grove. Lichen and moss inched their way up the tree’s trunk, and he felt their feather soft greenery tickle as if it grew along his own torso. He lifted his arms like the tree’s branches, where red kite and cuckoo balanced delicately, quieting their birdsong in anticipation of their native son’s invocation.
He began his chant, first in English, then unknowingly switching to the guttural lilt of Welsh. His deep voice rang out throughout the grove, and the earth answered his calling. The birch trees held their breath, their leaves unmoving, providing a deep primordial stillness through which the chants reverberated.