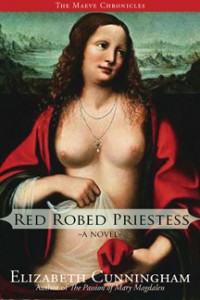 This is Part Two of my interview with the wonderful Elizabeth Cunningham, author of Red Robed Priestess, the fourth and final installment in the Maeve Chronicles. You will again also meet with Maeve, the series’ main character and Celtic born Mary Magdalen.

In Part One we discovered the complicated relationship between Maeve and Queen Boudica; we learned how the politics of Maeve’s time speak to our current world; we were privy to both Maeve and Elizabeth’s wit and wisdom; we explored their relationship with Jesus; and for fellow authors – Elizabeth spoke about her inspiration for writing.
I know you will enjoy meeting with Elizabeth and Maeve again, in the continutation of their interview!
8. This question came from my writing group: How did you, Maeve, survive and cope with all of the horrendous, ruthless things that happened to you? Elizabeth  – why does Maeve go through so much suffering?
Maeve—Just like any of us to whom life happens, I didn’t have much choice. As to how I survived and coped, I must give some credit to my eight mothers. They may have spoiled me, lovingly and foolishly deceived me, but I never had any doubt about my worth. I knew I was beloved. That makes a huge difference. I wish I could give everyone the strength that was given to me, the love that was lavished on me. I hope that reading my story does give people an imaginative experience of that kind of rock solid foundation.
For all I had eight mothers, I lacked a human father. When I found him, he turned all his self-hatred on me and tried to destroy me. I am not alone in this experience. And for women who have no loving father, it is hard to imagine one. Along comes King Bran, my foster father, all that a father could and should be. Elizabeth has heard from many women that the passages that describe my relationship with Bran have moved and helped heal them. That is the other key to survival. In a harsh, even ruthless world, open yourself to any kindness that is shown to you. When I was sold into prostitution, the kindness of my fellow whores gave me strength. After I was beaten and left in a cellar in Paulina’s house, a slave whose tongue had been ripped out went out of her way to salve my wounds.
That is how I not only survived but kept my soul intact. Receive kindness and show it!
Elizabeth–Maeve goes through so much suffering, because she is a human being. Her sufferings may seem extreme or exotic in their first century setting. But really, haven’t all or most of known heartbreak, loss, betrayal? People today are still being sold into prostitution. It may not be called by that name, but slavery still exists. Many, many people are exiled and homeless. Maeve is not the only one to have a child taken from her or to have an adolescent child run away. Many people are widowed tragically. And in many places in the world today people know the devastation of war and occupation.
Maeve does have both a hard life and an indomitable spirit. As she says in Magdalen Rising, when we are in the place of no hope, we can call on her and she will be with us. It is very moving to me to know that actual people have done just that. And Maeve has been there for them, not just in her story, but with them in their life.
“In a harsh, even ruthless world, open yourself to any kindness that is shown to you.”
9. The combination of hip 21st century language and more ancient language in the novel worked so well. How did you choose to use that writing device? Did anyone along the way tell you to edit it out? 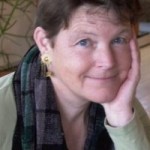 15. Is there anything about Red Robed Priestess that either of you would like to say…maybe something ‘off the record’, or something not able to be included in the final draft?

Elizabeth Cunningham is the author of The Maeve Chronicles, a series of four novels featuring a Celtic Magdalen, including her latest, Red-Robed Priestess. The first three in the series are Magdalen Rising, Passion of Mary Magdalen, and Bright Dark Madonna.

Elizabeth is the direct descendant of nine generations of Episcopal priests. When she was not in church or school, she read fairytales and fantasy novels or wandered in the enchanted wood of an overgrown, abandoned estate next door to the rectory. Her religious background, the magic of fairytales, and the numinous experience of nature continue to inform her work. Cun­ning­ham also authored many indi­vid­ual books as well, such as The Wild Mother; The Return of the God­dess, a Divine Com­edy; How to Spin Gold, a Woman’s Tale; Small Bird, and Wild Mercy, and a recently released album, MaevenSong.

Although Cunningham managed to avoid becoming an Episcopal priest, she graduated from The New Seminary in 1997 and was ordained as an interfaith minister and counselor. Both The Maeve Chronicles and her interfaith ministry express Cunningham’s profound desire to reconcile her Christian roots with her call to explore the divine feminine.

Since her ordination, Cunningham has been in private practice as a counselor and maintains that the reading and writing of novels has been has been as important to this work as her seminary training.

She is also the director of the Center at High Valley where she leads singing and poetry circles as well rituals celebrating the Celtic Cross Quarter Days. The mother of grown children, Cunningham lives with her husband in a sacred grove in New York State’s Hudson Valley.

Jodine Turner is the author of the visionary fiction Goddess of the Stars and the Sea series, and author of this blog. Her newest novel, Carry on the Flame: Ultimate Magic released December 6, 2011.